I am thankful for so many things in my life. I’ve been fortunate enough to have had some amazing experiences and met incredible people along the way. But none of that would have been possible without the constant love and support from my parents. Today, I’d like to dedicate my post to my mom.

My mom is from a tiny ity bitty town in Brazil, and I mean tiny. Nowadays, it’s about 11K people and it has grown significantly since I was kid. I imagine in the 60’s it was about 10 people… Okay, maybe a couple more than 10. Anyway, she moved to the capital alone when she was 12 to study and never lived at home again after that. All of her 7 siblings went back home after they completed their studies and are still there today, but my mom had bigger plans. She has done so many incredible things, like being one of very few women accepted into the engineering program at the federal university  when she was 17 (best schools in Brazil), living with the natives in the Amazon for months to study the ecosystems, and facilitating environmental education in schools around Brazil.

And even with everything going for her in Brazil, when my dad was offered a position in Canada, she gave up her promising career and moved so that my brother and I would have the opportunity to get a better education than anything offered in Brazil. She had to learn how to cook (which was really rough at first for all of us), clean, learn English, and so many things she never imagined she would ever have to do. But she did it for her family, and let me just say she is now a PHENOMENAL cook! You’d never guess that the first time she cooked was when she was 36. But even if she didn’t have a work visa she was always volunteering at national parks, working at greenhouses, and constantly learning something new.

After my brother and I were done “growing up,” she decided to go back to school and get her master’s in environmental science.In French. And no, she did not speak any French when she started. But yes, my mom is that awesome. In the last year of her program, about 2.5 years ago, my mom was diagnosed with stage 3 endometrial cancer (aka cancer of the uterus). She had surgery and went through chemo for almost all of 2013. But that didn’t stop her either. She finished her thesis while going through chemo and graduated in November, a month or two after her last chemo treatment. Like the total bad ass that she is.

I could not have asked for a better role model than my mom. She is the epitome of strength. I may have gotten my humor and absurd amounts of positivity from my dad, but my ambition and drive are thanks to my mom. She exudes confidence, power, and independence, and still everything she has ever done has been to help those around her lead a better life. She is stunning inside and out, and I can’t wait to see what she does next! If I become even half the woman that she is, I’ll consider my life a success 🙂

About a month ago the cancer popped up again and she began another round of chemo last week. It’s really scary, but if there’s anybody that can get through it stronger and better, it’s my mommy. 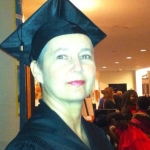 My mom graduating with her Master’s in Environmental Science from Concordia University in Montreal. 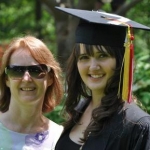 At my college graduation. 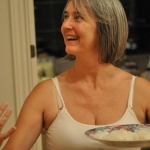 Being beautiful and stunning, just because. I swear, my mom takes the best candids. 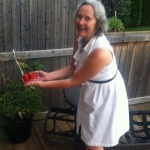 Her first tomatoes in her garden in Montreal!

My parents being dorks before they were parents.